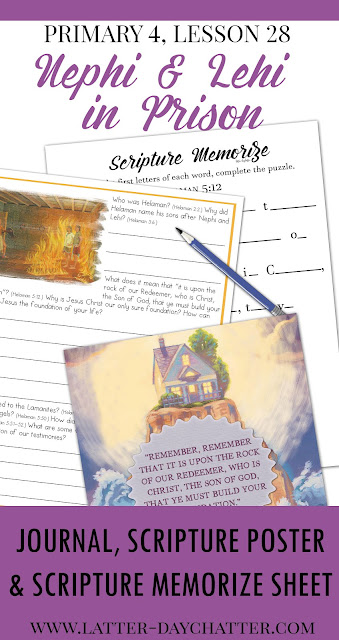 After the wars with the Lamanites, the prophet Helaman went back to preaching the gospel. After he died the records he kept went to his son, also named Helaman. He became a chief judge. He had two sons whose names were Nephi and Lehi.

After Helaman, his son Nephi became the chief judge and stayed a chief judge for 10 years.During that time the Nephites had wars, pride, wickedness and they lost many cities including the city of Zarahemla. Just like Alma the Younger (his great-grandfather) Nephi resigned as chief judge and preached the gospel. Nephi decided to resign as chief judge because the laws of the land were voiced by the people. And so because the people were wicked the laws were corrupt as well, he felt that he would do more good by preaching the gospel.

Starting in the city of Bountiful, the two brothers went from city to city teaching to all the people of Nephi. They then went to the city of Zarahemla to teach among the Lamanites. Over 8,000 Lamanites and many Nephites repented of their sins. 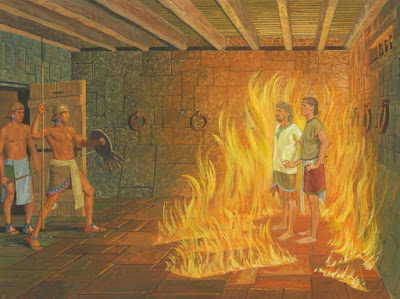 The brothers were safe within the fire and were not harmed.  Nephi and Lehi stood and spoke to the Lamanites telling them that it was  the power of God that was protecting them in the fire and away from the hands of the Lamanites. The earth then shook and the walls of the prison shook so much that it looked like the prison might fall, but it did not.

The Lamanites were overshadowed with a cloud of darkness and they were scared. While in the darkness a voice came as if from above the clouds and said: "Repent ye, repent ye, and seek no more to destroy my servants whom I have sent unto you to declare good tidings."
The voice came as a still voice as if a whisper and it pierced their souls.
The walls and the earth shook and the voice spoke two more times! Because of the darkness the Lamanites couldn't go anywhere and they were terrified.

A man who was once a Nephite, named Aminadab, saw through the darkness that Nephi and Lehi's faces were shining. The brothers were looking and talking up toward heaven. Aminadab told the Lamanites to look and they asked him what they were doing. He told the Lamanites that they were talking with the angels of God, The Lamanites then asked Aminadab how they could get the dark clouds to go away and he said that they must repent, pray unto God and have faith in Christ. The Lamanites did these things and the cloud of darkness went away and they were encircled with fire and it didn't hurt them. They were so happy, the Holy Ghost entered their hearts and they saw and heard many marvelous things.

A voice came unto them again as if it were a whisper and said: "Peace, peace be unto you, because of your faith in my Well Beloved (Jesus Christ) who was from the foundation of the world". About 300 Lamanites then looked up and the heavens opened and angels came down and ministered unto them.
The Lamanites went and told others about what they had seen and heard. Most of the Lamanites believed them and put down their weapons. They also stopped hating the Nephites and gave back the lands they had taken back to the Nephites.

Because of the conversion of so many Lamanites, the Lamanites became a good, righteous people even more righteous than the Nephites and would begin teaching the gospel to the Nephites. 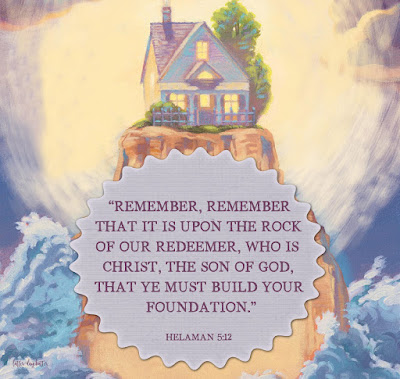 Golly, such an amazing powerful story and I just get goosebumps all the time!


In the parable of the wise man and the foolish man, Jesus is teaching us how we can stay strong when hard things in our life happen. It is through having faith in Him and by following His teachings. When we have a strong testimony, we can get through anything.

Have a friendly competition by building with popsicle sticks, binder clips and clothespins!