LDS.org Primary 4, Lesson 26: Captain Moroni and the Title of Liberty 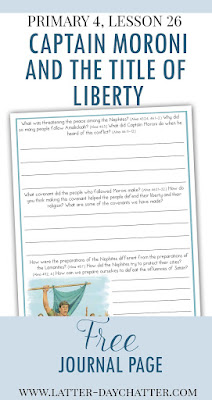 Captain Moroni was a true hero. He followed the Holy Ghost and fought for the freedom of his people from evil.

When he was just 25 years old he was appointed as the chief captain over every Nephite army. He was full of faith and believed in the liberty and freedom of his country.

A man named Amalickiah wanted to be king over all the Nephites.  Amalickiah was already the leader over a group of Nephies who had become proud from all their riches. These Nephites began to hate the Church and would no longer keep the commandments or listen to the church leaders.
Amalickiah told his followers that the Nephite government of judges was wrong and that they would better off if they were ruled by a king. He told the people that if they would make him their king that he would give them powerful positions.

Moroni knew that if there an evil king like Amalickiah that they would destroy the freedoms that the Nephite people had fought a long time for. He knew that the people would be in danger and they wouldn't be able to worship how they wanted. 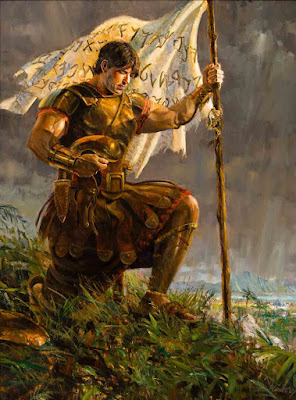 Moroni removed his coat, tore off a piece and wrote this message : "In memory of our God, our religion, and freedom, and our peace, our wives and our children." He then attached it to a pole and it became the Title of Liberty. After putting on his armor, Moroni prayed for his people. He then went among his people waving the banner so everyone could see the message written and cried in a loud voice, " Whosoever will maintain this title upon the land, let them come forth in the strength of the Lord, and enter into a covenant that they will maintain their rights, and their religion, that the Lord God my bless them."  People began to gather with their armor and were ready to fight for their freedom.

Amalickiah saw that the Nephites were ready to fight with Moroni and knew that if he fought that that he would not succeed. He fled to the land of Nephi. Moroni tried to cut the people of Amalickiah off but a few of his men and Amalickiah were able to escape.

Captain Moroni had the Title of Liberty to be put on all the towers in the land of the Nephites. There was peace for 4 years!

Amalickiah got to the land of Nephi with a lot of deceit and dishonest ways he was able to become king of the Lamanites. He stirred up the Lamanites in anger to go to war with the Nephites because he wanted to be the ruler over all the land. The Lamanites got ready for battle.

While Amalickiah was ruling over the Lamanites, Captain Moroni readied the Nephites by strengthening them spiritually, more people joined the armies and they built enormous hills and high stone walls around their cities and borders.

Because the Lamanites were ready for battle with armor they thought that they would be able to beat the Nephites but when they saw what the Nephites had constructed around their cities they became afraid. They tried many different ways to get into the Nephite cities but the plan and defense that Captain Moroni created they couldn't get through. During the Lamanites attempt to get into the cities, all of the chief captains were slain and more than 1,000 of their army was killed and NONE of the Nephites were killed. The remaining Lamanite armies fled and went back to King Amalickiah who was very angry that his armies couldn't subdue the Nephites and they weren't enslaved, Amalickiah cursed both God and Captain Moroni.

The Nephites thanked God that they were delivered from the hands of the Lamanites and were safe.