{Sharing Time} God has commanded His people to build temples 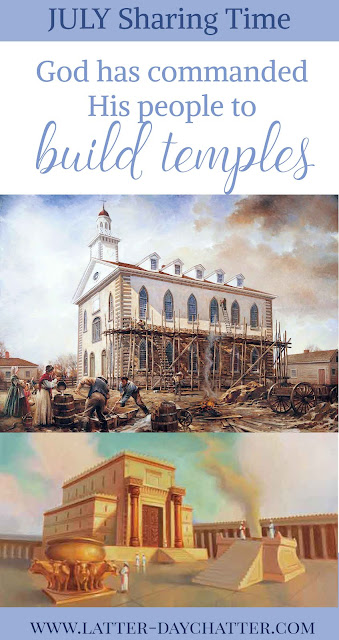 So I think I've gone a little overkill for this sharing time with a whole bunch of information but I hope that you can pick and choose and you can find some help. For this lesson, I really wanted to show that even when there were temples in biblical times, the Lord was behind each one and that each is built by the direction of Jesus Christ. I've included links for the Tabernacle during the time of Moses, Solomon's Temple, Nephi's temple in Bountiful, and the Kirtland Temple. You can also add your own area's temple with facts about it.

*text from the Old Testament Stories

2 Speak unto the children of Israel, that they bring me an offering: of every man that giveth it willingly with his heart ye shall take my offering.

8 And let them make me a sanctuary; that I may dwell among them.

16 And thou shalt put into the ark the testimony which I shall give thee.

22 And there I will meet with thee, and I will commune with thee from above the mercy seat, from between the two cherubims which are upon the ark of the testimony, of all things which I will give thee in commandment unto the children of Israel. 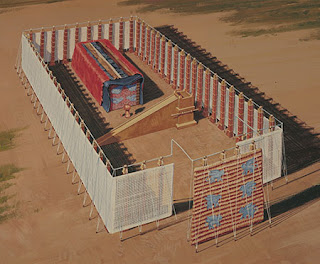 Ex 31:18 ¶And he gave unto Moses, when he had made an end of communing with him upon mount Sinai, two tables of testimony, tables of stone, written with the finger of God.

Kings 8:9 There was nothing in the ark save the two tables of stone, which Moses put there at Horeb, when the Lord made a covenant with the children of Israel, when they came out of the land of Egypt. 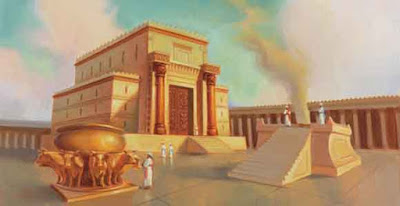 King Solomon  Temple
Read more about the Temple of Solomon

*text from the Old Testament Stories

1 Chronicles 22:6-11
6 Then he called for Solomon his son, and charged him to build an house for the Lord God of Israel.

7 And David said to Solomon, My son, as for me, it was in my mind to build an house unto the name of the Lord my God:

8 But the word of the Lord came to me, saying, Thou hast shed blood abundantly, and hast made great wars: thou shalt not build an house unto my name, because thou hast shed much blood upon the earth in my sight.

9 Behold, a son shall be born to thee, who shall be a man of rest; and I will give him rest from all his enemies round about: for his name shall be Solomon, and I will give peace and quietness unto Israel in his days.

10 He shall build an house for my name; and he shall be my son, and I will be his father; and I will establish the throne of his kingdom over Israel for ever.

11 Now, my son, the Lord be with thee; and prosper thou, and build the house of the Lord thy God, as he hath said of thee.

There was peace in the land of Israel. God said King Solomon should build a temple in Jerusalem. It would be the house of God. The ark of the covenant would be in the temple. The people would not need the tabernacle anymore because they would have the temple.
Thousands of people helped build the temple. It was made of stone and wood. Men brought the best wood from far away. They cut large stones for the walls of the temple.
Another room had a pool filled with water. The pool was on the backs of twelve oxen. The oxen were made of brass.
It took seven years to build the temple. At last it was finished. Then Solomon put beautiful gold and silver bowls in the temple.
The priests brought the ark of the covenant from the tabernacle. They put the ark in the temple. The two stones with the commandments written on them were in the ark.
The priests of Israel came to the temple. They sang songs and thanked God for the temple. The cloud that had been over the tabernacle filled the temple. The temple was the house of God.
Solomon spoke to the Israelites. He told them to obey God’s commandments. Then Solomon prayed to God. He asked God to forgive the people when they had repented.
Solomon made sacrifices to God. Fire from heaven came down to the altar. The fire burned the sacrifices.
The people worshiped God. They thanked him for the temple.
God spoke to Solomon. He said Solomon and the Israelites should be righteous. Then he would bless them forever. 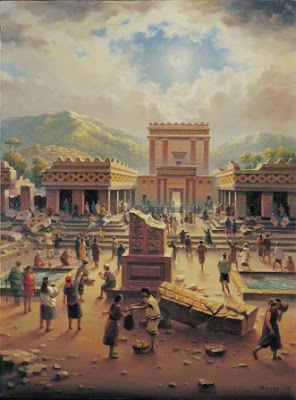 2 Nephi 5:16
16 And I, Nephi, did build a temple; and I did construct it after the manner of the temple of Solomon save it were not built of so many precious things; for they were not to be found upon the land, wherefore, it could not be built like unto Solomon’s temple. But the manner of the construction was like unto the temple of Solomon; and the workmanship thereof was exceedingly fine. 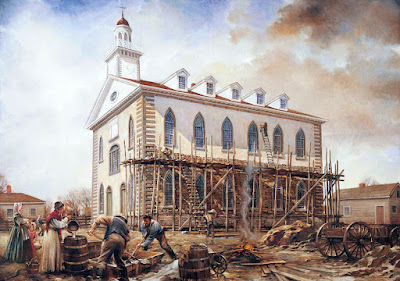 D&C 42:36
That my covenant people may be gathered in one in that day when I shall come to my temple. And this I do for the salvation of my people.

God commanded Joseph Smith in December 1832 to build a temple in Kirtland, Ohio. The Prophet and several others saw the Kirtland Temple in a vision, which provided its design. Construction began in June 1833, at a time of great poverty in the Church. Work slowed in 1834 because many brethren were absent with Zion's Camp. When they returned, Joseph Smith labored with others in the sandstone quarry, and vigorous efforts to build the temple resumed. The Prophet Joseph dedicated the Kirtland Temple on March 27, 1836... Many church members witnessed heavenly manifestations during this glorious season, culminating in Jesus Christ's appearance to Joseph Smith and Oliver Cowdery to accept the temple. Moses, Elias, and Elijah also appeared to Joseph and Oliver to restore priesthood keys for the salvation of all mankind. (source)
The Saints moved from Kirtland and the temple fell into the hands of another Church.

Both modern and biblical temples were built under the direction of Jesus Christ but there is a difference between the two.

The law of Moses temples were operated by men born to the Aaronic or Levitical Priesthood and were led by a high priest, who was a literal descendant of Aaron. That high priest was the only person who entered the most sacred room on only one day a year—the Day of Atonement. It was just outside of the temple on an altar that sacrifices prescribed in the law of Moses were offered.

Modern temples operate under the direction of a living prophet who holds the keys of the Melchizedek Priesthood that were first restored to Joseph Smith. All worthy men, women, and children over the age of 12 are able to enter on a regular basis. (source)


Here's a really awesome video that is well worth the time to at least watch if not to share with your Primary.


I love this scripture and wanted to share a poster for it.
Why do we build temples?
After all the ordinance work, because it is a place for the spirit to dwell, I just love to be there and pray of things that are troubling and really get an eye opening experience and help to face the troubles. 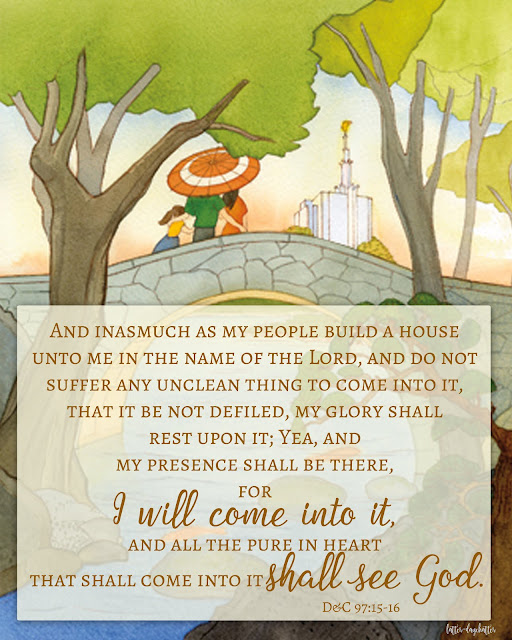 Other resources:
A History of Temples
Temples-The Gates of Heaven
Ancient Temples and Their Functions