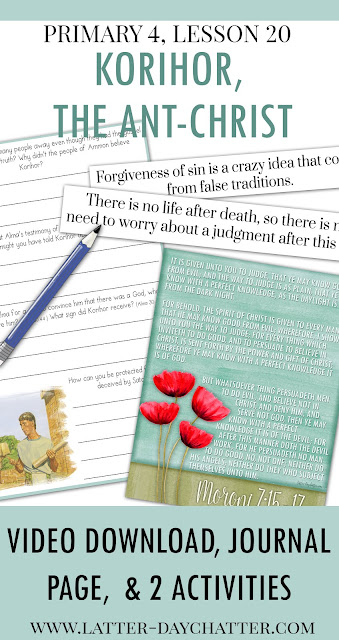 During this time, the Nephites were at peace and were righteous. A man named Korihor came to the land of Zarahemla. He was an  Anti-Christ. He began preaching to the people but everything he said was false and many people believed him.

Put the phrases onto the board, give out assignments of the scriptures once the kids know what their scripture goes to have them come up and write their scripture by the correct phrase.

Korihor traveled to the land of Jershon to the people of Ammon but they did not believe what Korihor said and bound him and took him to Ammon. Ammon kicked him out of Jershon where Korihor went to Gideon. Here again he didn't have a lot of success and was taken to their chief judge, Giddonah. Giddonah had Korihor bound and delivered to Alma the high priest.
Korihor accused Alma and the other high priests that they were trying to get more power and authority and that was why they taught of Christ. Alma told Korihor that none of the high priests were paid for their service.
Alma asked Korihor if he believed if there was a God. Korihor said that he didn't believe. Alma asked if he had any evidence that there was no God.
Korihor taught that we can't know of things that we haven't seen. He argued that a person who hadn't seen God couldn't know His existence.
Korihor asked Alma for a sign of God's power if Alma showed him then he would believe. Alma told Korihor that there are many signs in the scriptures, the testimonies of others, the prophets, the creation of the Earth, and the movement of the planets, all of which are signs of God's existence.
Alma was sad to know that Korihor's heart was so wicked and he knew that he would be destroyed but Alma knew that is was better than have many more people deceived by Korihor. Alma told Korihor that if he denied that there was a God again that God would smite him and he would become dumb, unable to speak.
Korihor denied again, and through the power of God he was struck dumb. Alma wrote down, "Are you now convinced of the power of God?" Korihor wrote back that only through the power of God could he have been struck dumb and that he always believed there was a God. He said that Satan had deceived him and had appeared as an angel telling him to reclaim the heart of the people. Korihor begged Alma to pray to have the curse be lifted but Alma knew if it it were lifted Korihor would continue teaching false doctrines.
The people that believed Korihor's teaching were quick to repent. Korihor was cast out and was forced to go house to house and beg for food. When he went among the Zoramites to beg for food, he was trampled to death.

I LOVE this video of the account of Alma and Korihor! Goosebumps all over! I just keep watching it over and over.

Bring in a fake flower and a real flower. On the board, create two columns, one side label real flower and the other fake flower. In each column have the kids write down things about each that they notice. Remind them to use the five senses -- how does it feel? What do they look like? What does it smell like? etc (You could also write some questions about the flowers on the board)

How do you know which is fake and which is real? 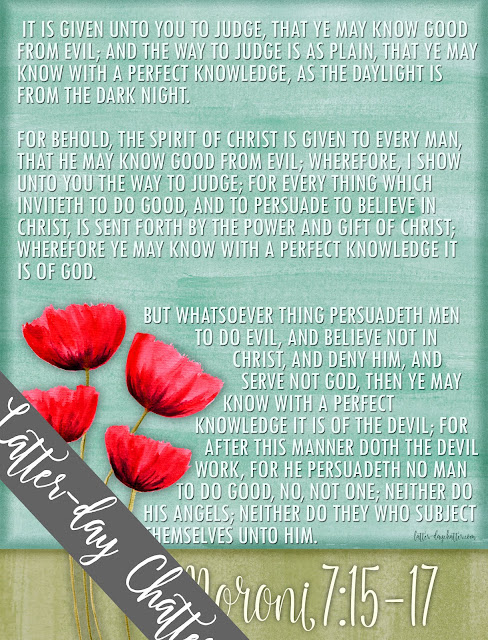 Just as there are ways to tell the difference between a real/fake flower, Korihor's teachings were also fake.
Go through each of the false teaching of Korihor and explain each truth. How can we tell when something is true instead of false?
The more that we learn about something, we become an expert at it and can easily tell what is real/true instead of fake/false.


Now that we know that we can learn how to tell what is true and what is false but where can we learn?
The Scriptures, the Holy Ghost can testify of the truthfulness, and the prophet will tell us the truth as well. 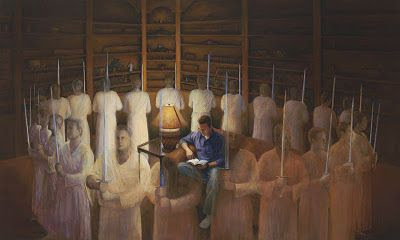 I really love this artist's interpretation of the power of studying the scriptures and I think you could easily incorporate it when you talk about ways that we can thwart the temptations of Satan . 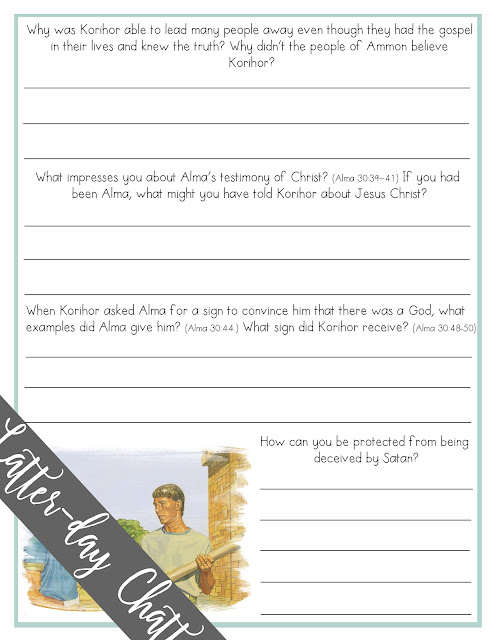 References:
An Anti-Christ in the Book of Mormon