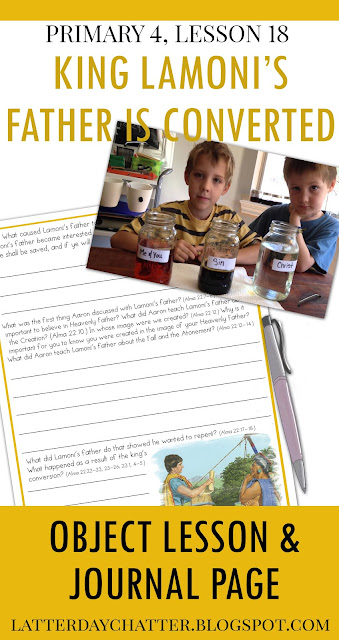 This story is a favorite of mine! I love how much King Lamoni has grown and the faith of his father in what the missionaries are teaching him that he could truly be forgiven of his grievous sins through the Atonement of Jesus Christ.

After establishing the Church in King Lamoni's kingdom, the king asked Ammon to go with him to the land of Nephi where his father, who was the king over all the land, lived. The Lord told Ammon that he shouldn't go to the land of Nephi because King Lamoni's father would try to kill him. Instead Ammon was told to go to Middoni and help Aaron and his companions who were in prison. Ammon told Lamoni what the Lord had said and King Lamoni said he would go with Ammon.
As they were going to Middoni they met King Lamoni's father. He asked Lamoni why he was traveling with a Nephite. Lamoni told his father that he and his people were taught by Ammon and were converted and he was helping Ammon get Aaron out of prison.
Lamoni's father was angry with Lamoni and commanded him to kill Ammon. Lamoni refused and told his father that he knew that Ammon and his brethren were prophets of  God. After hearing this Lamoni's father drew his own sword to kill Lamoni, Ammon stepped forward and stopped the king from killing his son and instead he tried to kill Ammon but Ammon was able to overpower him.
The king begged Ammon for his life and offered Ammon anything he wanted, even half of his kingdom. Ammon asked the king to get his brothers out of prison and to let King Lamoni keep his kingdom. Lamoni's father was surprised that Ammon asked nothing for himself and saw the love that he had for Lamoni. The king granted Ammon's wishes and asked for him and his brothers to go to the land of Nephi to learn more about what they were teaching.
Ammon and King Lamoni got to Middoni and were able to get Ammon's brothers released. Ammon was sad to see how badly they were treated in prison. Ammon was called back to the land of Ishmael with King Lamoni.
Aaron and his brothers were led to the land of Nephi. Aaron taught the king from the scriptures. Aaron taught the king about God, the Creation, the Fall of Adam and the Plan of Salvation, and the need for Christ to atone for the sins of the world so that all could have eternal life.
The king wanted to know what he needed to do to gain eternal life and would offer anything to have it. Aaron told him that he needed to repent. The king wanted to know if there was a God. When the king kneeled and asked, he was struck as if he were dead. The servants ran and told the queen who came and ordered Aaron and his brothers to be killed, but the servants were scared to touch Aaron. The queen told them to call the people. Aaron, knowing the hardness of the people's hearts, took the king's hand and he rose. He then began teaching them and his household was converted.
After the king's people arrived, the king began ministering to them as well. After the people calmed, the king had Aaron and his brothers teach them.
The king sent a proclamation throughout all the land that no one should harm the four brothers. The missionaries went to many cities teaching, baptizing and establishing the Church.


Here's a really AWESOME visual of how we can be forgiven of our sins through Christ. It's really cool and works and just takes a few ingredients! 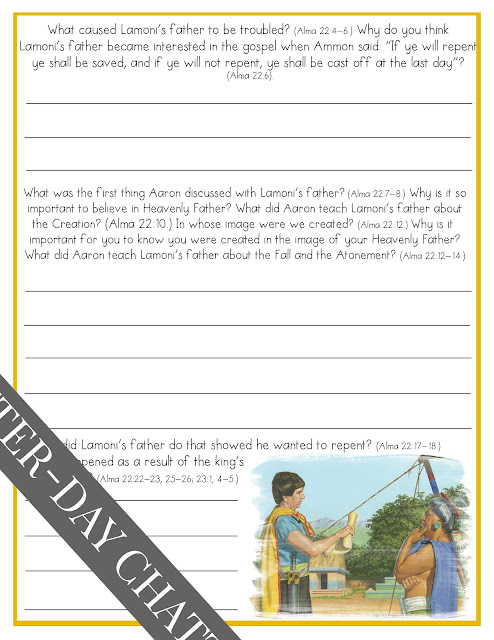