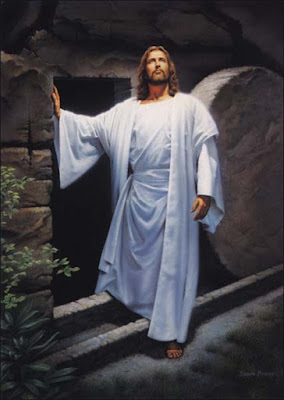 New Testament Seminary Manual (this pieces apart Jesus' trial to His Resurrection, with very interesting comments to add to your lesson)

He Sent His Son: the story of Easter -a small coloring book of the last week of Christ's life
Easter Week: a description of Christ's last week and what happened each day.


Mary ran and told Peter and John that Christ's body had been stolen. The two apostles ran to the tomb to find it empty and the clothes that Christ has been buried in were there, they didn't know what to do and went home. Mary Magdalene stayed at the tomb, crying, she looked in the tomb again and there she saw two angels. They asked her why she was crying, she answered saying that someone had taken Jesus' body and she didn't know where it was. She then turned and there stood a man, He asked why she was crying and she asked him if he knew where the body was. The man said, "Mary", she knew then that it was Jesus Christ. He told her that she couldn't touch Him because He hadn't gone yet to Heavenly Father. Jesus then asked Mary to tell the apostles that He was resurrected. Mary and other women went to tell the apostles but they didn't believe them. Later on, the apostles were talking and Jesus came into the room, but they were afraid because they thought Jesus was still dead.

Jesus told the apostles to touch His hands and feet. He truly had been resurrected, His body and His spirit joined together again. His visit to the apostles is important because He told them to touch Him so that they might know that He had risen and that they could a witness of His literal Resurrection.
Jesus Christ stayed with the apostles for 40 days teaching them. He told them that they needed to go and teach the gospel to all people, He said that He would have to leave soon but that the Holy Ghost would help them. He then ascended into the heavens, two angels told the apostles that Jesus Christ would come back again some day.
The apostle Peter then became the president of the Church with James and John as His counselors. They would now become the leaders of Jesus Christ's Church. 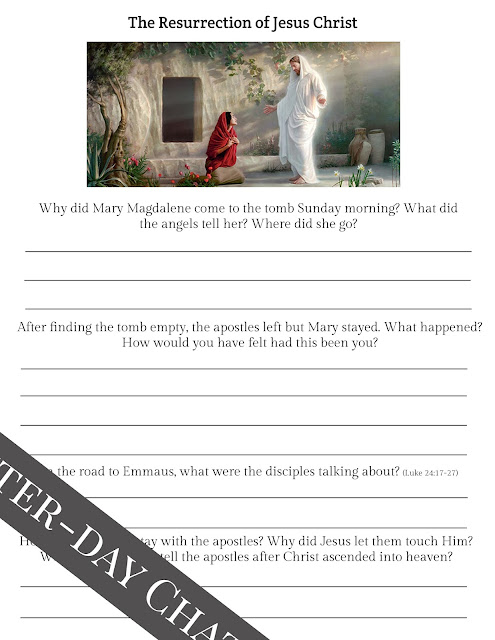