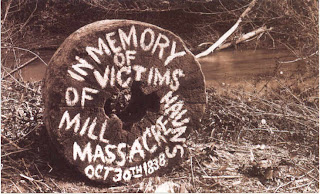 Amanda Barnes Smith moved with her husband and 5 children from Kirtland, Ohio, to Caldwell County, Missouri, in 1838. They stopped at Haun’s Mill to camp on Oct. 30, where a mob with painted faces commenced a brutal massacre a few hours later. Amanda’s husband, Warren Smith, and their young son, Sardis, were killed. Another son, 6-year-old Alma, lay close to death, one hip joint being entirely shot away. Amanda wrote: "Yet was I there all that long, dreadful night, with my dead and wounded, and none but God as our physician and help. ‘Oh, my Heavenly Father,’ I cried, ‘what shall I do? Oh, Heavenly Father, direct me what to do!’ And then I was directed as by a voice speaking to me. . . . as distinctly as though a physician had been standing by speaking to me."
Amanda continued to pray and was shown exactly what to do to save her young son. The next day she said, "‘Alma, my child, you believe that the Lord made your hip?’ ‘Yes, Mother.’ ‘Well, the Lord can make something there in the place of your hip, don’t you believe he can, Alma?’ ‘Do you think that the Lord can, Mother?’ . . . ‘Yes, my son, he has shown it all to me in a vision. . . . the Lord will make you another hip.’" Alma did grow another hip and was not the least handicapped through his life, living to serve and preside in four foreign missions for over 11 years. During his second mission to Hawaii, he helped save the life of Lorenzo Snow, who would later become the President of the Church.
When living in Quincy, Illinois, a few months after the Haun’s Mill massacre, a board of doctors in St. Louis heard of Alma Smith’s "Mormon Miracle" and sent a team of 5 physicians to investigate. They could not understand how Alma’s leg, without any bone in the hip joint, was just as strong and active as the other one. They asked Amanda the name of the surgeon who had performed this wonderful piece of surgery. She replied, "Jesus Christ." One said, "Not the Savior of the World?" Amanda responded, "Yes, the same sir. He was the physician and I was the nurse."
Amanda also wrote of her source of solace during the tragic time at Haun’s Mill:
" . . . those five weeks . . . I was a prisoner with my wounded boy in Missouri, near the scene of the massacre, unable to obey the order of extermination [for Mormons to leave the state or be killed]. In our utter desolation, what could we women do but pray? Prayer was our only source of comfort, our Heavenly Father our only helper. None but He could save and deliver us.
"One day a mobber came from the mill with the captain’s order, ‘The captain says if you women don’t stop your d—d praying he will send down a posse and kill every d—d one of you.’ And he might as well have done it, as to stop us poor women from praying in that hour of our great calamity. Our prayers were hushed in terror. We dared not let our voices be heard in the house in supplication. I could pray in my bed or in silence, but I could not live thus long. This silence was more intolerable than had been that night of the massacre. I could bear it no longer. I pined to hear once more my own voice in petition to my Heavenly Father. I stole down into a cornfield and crawled into a ‘stout of corn’. It was as the temple of the Lord to me at that moment. I prayed aloud and most fervently. When I emerged from the corn a voice spoke to me. It was a voice as plain as I ever heard one. It was no silent, strong impression of the spirit, but a VOICE, repeating a verse of the saint’s hymn: That soul who on Jesus hath leaned for repose, I cannot, I will not desert to its foes; That soul, though all hell should endeavor to shake, I’ll never, no never, no never forsake!
"From that moment I had no more fear. I felt that nothing could hurt me. Soon after this the mob sent us word that unless we were all out of that state by a certain day we should be killed."
When that day came, Amanda could not leave, due to the condition of her son and the fact that the mob had stolen her horses, cattle, wagons and tents and other provisions. She faced fifty armed men with confidence when they came to execute their sentence. When her son was well, she walked ten miles to Daviess County to the home of the captain of the mob and demanded that he return her horses. He refused. But Amanda remembered the promise given in her corn field temple:
"I left without the captain’s permission to take my horse . . . I went into his yard and took it . . . I next yoked up a pair of steers to a sled and went and demanded it also. . . . I started the first of February for the State of Illinois without money – mobbed all the way – I drove my own team and slept out of doors. I had four small children and we suffered much with hunger, cold and fatigue. For what? For our religion, where in the bossed land of liberty, ‘deny your faith or die’ was the cry.
"I felt the loss of my husband, but not as I should if he had apostatized; he died in the faith and in hopes of a glorious resurrection. As for myself, I felt an unshaken confidence in God through it all. I had been personally acquainted with the prophet Joseph for many years; had seen his walks and knew him to be a Prophet of God. That buoyed me up under every trial and privation."