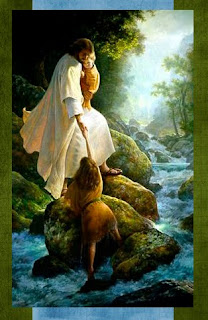 As I finished washing the dishes, I glanced out the window and saw my eight-year-old brother dangling a long pole in the swimming pool. His tangled brown hair hung in his eyes, and his clothes were splashed with water. He always managed to avoid helping with the chores, and today was no different. I watched as he carefully steadied the pole in the water, lifted it, and tapped it on the concrete deck.
"What's he doing?" I wondered. I decided to go outside and see what time-wasting activity had kept him from helping me.
"What are you doing, Ben?" I asked as I walked over to where he stood.
"Saving bees," he replied. I could now see that each time he steadied the pole, it was beneath a bee. He then lifted the bee out of the water and placed it on the warm concrete to let the bee dry its wings and fly away.
"But some of them won't hold on," he continued. "I try to save them, but they just keep trying to swim and won't grab the pole." "Great," I thought. "One less bee to sting me." I began walking back toward the house, determined to waste no more of my time.
Then Ben spoke again,"It's like Jesus," he said.
I stopped and walked back to my little brother. "What do you mean?" I asked, confused by that comparison.
"I try to save the bees from drowning, but they have to choose to grab the pole. I can't force them," he explained. "And that's like Jesus and us. He wants to save us, but we have to choose to follow Him and accept the Atonement. He can't force us." And with that simple analogy, Ben went back to saving the bees.
As I thought about what he said, I realized how much I was like one of those drowning bees. When I faced a struggle in my life, I was prone to battle it out alone, convinced I was strong enough to make it. Trusting the Savior enough to stop 'treading water' was difficult. But as I watched Ben patiently pulling each bee out of the water, I began to understand how willing the Savior is to help me. I gave Ben a hug and returned to the house, letting him continue his work. And I promised myself the next time I saw a pole coming toward me, I would have the faith to grab on tight and let the Savior lift me up.
By Charity Brunson